Shaping the Global Agenda through Partnerships 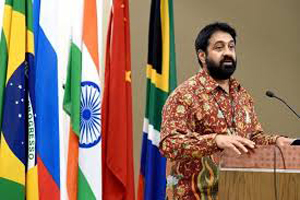 Africa and Asia Solidarity in the era of COVID-19

We are passing through a stage in human history that will remembered as among the most challenging periods that humanity has endured. COVID – 19 has globalised the oldest and most significant threat to human existence. The threat has been so severe that we have taken to commit ourselves to isolation. Living without social contact goes against the grain of the basic human need for social interaction and human contact, and as the virus becomes globalised human interaction is becoming insular, it is at this point that we are experiencing an increasing need for cooperation and solidarity.

The painful short term scenarios will be marked by illness and loss of life. Along with these age old enemies to humankind we are seeing a renewed upsurge in our dearest friend, human solidarity. There is no disputing that we are at a historic crossroad and the decisions we take now will have lasting implications. Notably, having learned difficult and tragic lessons from countries in Asia, Africa and other parts of the world, most nations have prioritised human life and health. World economies have been decimated, security threats in vulnerable regions are present and continue to creep while public health systems worldwide are facing incredible strain with many on the verge of collapse.

Despite these realities, our leaders chose to ensure that the health, wellbeing and survival of their populations are prioritised. These are humane decisions that come at a huge cost and we have accepted them. We are confident that we will survive this, and that humanity will emerge transformed, stronger and even more resilient than ever. Our patience, trust and faith and proactive and shared actions will lead us in that direction.

Africa and the future of cooperation

On 09 Feb 2020, President Ramaphosa accepted South Africa’s Chair of the African Union (AU). In his opening statement he drew on the collective strength of Africa’s leadership when he stated HE and I quote, “Our collective work to ensure political and economic unity, good governance, and peace should be strengthened by supporting integration, industrialization, economic development, trade and investment.”
The notion of a new reality and the fractured world that the World Economic Forum has used to describe 21st century events are now moving from projections to becoming part of our history. South Africa as Chair of the AU has prioritized the strengthening of intra African trade through the African Continental Free Trade Area (AfCFTA), this will unleash a market of almost 3 trillion USD market. According to the United Nations Conference on Trade and Development (UNCTAD) report on  Economic Development in Africa in June 2019,  Intra-African trade  is at about 2% of total Continental trade during the period 2015–2017, while comparative figures for the Americas is at approximately 40%, Asia at 61%, Europe at 67 % and Oceania at 7%. Despite the weak numbers, since 2008 Africa along with Asia, are the only regions with a growing trend in intraregional trade. This is a massive investment opportunity and Africa looks forward to working with global partners, as we collectively strive to rejuvenate and diversify our key economic sectors.

The AU, under South Africa’s Chair has reprioritised the Silencing of the Guns. One of the main obstructions to economic development and intra-regional trade is the absence of a peaceful, secure and stable environment. Investment in infrastructure is critical, but if conflict persists the investments will yield little or no results, The AU’s prioritisation of the ‘Silencing of the Guns’ by 2020 is necessary to ensure that investors feel secure, and South Africa remains fully committed to ensuring that  Africa is successful in securing peace mechanisms and agreements that lead to sustainable growth and development. While Libya, South Sudan, and Somalia on the African continent endure some of the most violent, bloody and vicious conflicts, as well as Yemen and Syria in Western Asia and the continued surges in violence and conflict in different parts of the world are fuelled by the easy availability of illicit weapons together with poverty, underdevelopment and inequality. These historic fault lines must be addressed comprehensively in order to ensure a secure and stable environment conducive to growth and prosperity.

Apart from our regular public health issues, the COVID-19 pandemic presents the worst case scenarios on the impact of climate change in Africa’s development. Africa only contributes 2-3% of the world’s carbon emissions yet Africa, in all likelihood will bear the brunt of climate change trends on agriculture, water, agrarian development, food insecurity, peace and security and social stability, to name a few. However, Africa has the largest percentage of the world’s arable land and burgeoning natural resources that some have described as being both a “blessing and a curse.” A further advantage of both Africa and Asia is the demographic dividend of the most youthful populations, this most important asset must be maximised for the benefit and development of Africa and Asia.

Cooperation and Solidarity for development

The historical Africa Asia solidarity must guide us at a time of this global crises. The ideals of solidarity, peace, prosperity and development are widely touted. We must ensure that the post COVID-19 era drives and deepens our cooperation as we are called upon to rebuild our economies and societies.

In 2015 Indonesia hosted the 60th Anniversary of the Africa Asia Conference in Jakarta, Indonesia and co-hosted with South Africa. President Joko Widodo and his co-host then deputy President Ramaphosa hosted 33 heads of state and representatives from 77 countries. The Summit produced three documents; the Bandung Messages, the Declaration on Strengthening the New Asian-African Strategic Partnership (NAASP) and the Declaration on Palestine. The Summit reaffirmed the Bandung Spirit and the need to energise Africa-Asia solidarity and cooperation.

Our significant, albeit on-going achievements are conceptualised through our multilateralism and our collective commitment to formations such as the Non-Aligned Movement (NAM), G77 plus China, the India-Brazil-South Africa (IBSA), the BASIC climate change coalition, consisting of Brazil, South Africa, India and China, and the G20 group of the world’s most influential economies. Our ocean space binds us as humanity, South Africa has being working assiduously to build the apex Indian Ocean grouping namely Indian Ocean Rim Association (IORA) which links Africa, Asia and Oceania. IORA through its membership is actively seeking to create linkages through the Indo Pacific and Atlantic Oceans in forging the concept of “one ocean” for the benefit of all humanity.

According to the UNDP, the current models of South-South cooperation offer a multitude of benefits when we consider the advantages accrued from national and regional science, technology and innovation plans; economic and social planning; linkage of research and development with economic growth; modern management and administration; technical, scientific and administrative human resources; and accelerated professional training at different levels. The global landscape and our vision of socio-economic cooperation and inclusive development must be realised without compromise in the post COVID-19 era.

Among the most significant outcomes of this shift in the balance of global economic power has been the formation of the Brazil-Russia-India-China and South Africa (BRICS). The New Development Bank and the Africa Regional Centre, has already had a positive impact on the global financial architecture.  We believe that when history is written it will describe this moment as one that contributed significantly to the reform and creation of an inclusive global financial architecture working in the interests of all the peoples of the world.

One could argue that the 21st century context stifled the space for anything short of discourse outside of real politik and survivalist approaches to international relations. We as nations of the South forged centuries old bonds, both before, during and after the yolk of colonialism and the associated slave trade. In the last two decades Africa has forged notable partnerships with China, Japan, India, Russia, the Arab world and the EU to name a few. The challenges of a post COVID-19 era re-examine, redefine and reenergise these formations as mutual conduits of our collective development agenda. We are required to reenergise these formations as further conduits of our collective developmental agenda.

The COVID era is marked by online, virtual interaction. This demands secure and more efficient (cost and speed) cyber and ICT services. Virtual platforms are proliferated with ‘intelligent and disruptive technologies’ and these have now converged to significantly reconfigure global economics, geopolitics and security. It is not insignificant that these ongoing processes are gaining ground while global trade and investment trends are threatened by what seems to be a reversal of globalization.

Leading global powers have a meaningful level of economic interdependence which remains central to their relations, this interdependence has traditionally played a significant role in containing possible military skirmishes through balance of power that is dynamic. However, the trade wars and 5G tensions have created both political, technological and commercial complexities, exposing the weaknesses and contradictions inherent within the current global architecture. Travel and Tourism is an example of a strategic and emerging sector in Africa and Asia that we expect to change substantially. We need to ensure the free flow of people but not the flow of the virus will continue albeit under a new paradigm. This challenge will keep us busy for years to come and will also impact on the nature of travel in the future.

COVID-19 has provided us with an opportunity to bring to the fore cooperation in the global health sector in order to create a global health architecture that leaves no one behind. As the president of the AU Commission, Moussa Faki Mahamat noted at the virtual Summit of the NAM held on 4 May 2020, “We must organise another chain, the chain of solidarity to help, with equipment and pharmaceutical products, (to) the poorest.” As Africa we need to utilise this opportunity for joint ventures, for capacity building, for a renewed focus on developing pharmaceutical and medical supply industries, while deepening collaboration with global partners.

Several leaders have categorized the 21st Century as the Asian Century and in recent times several leaders from Africa and Asia and scholars have categorized the 21st Century as the African Asian Century. We have seen momentous growth and development both in Africa and Asia in the first two decades of the Century and this solid partnership forged in the history of common struggle must serve as the beacon of navigating a new win-win partnership for the benefit of all countries and its people as well as humanity at large.

We need to remind ourselves that the African and Asian centuries have enjoyed increased momentum in the last decade of the century. This momentum arguably started with the end of the Cold War and has been phenomenal. As we navigate this terrain, we will learn with, and from each other as each country and region will continue to deal with its own issues. The current global security situation is worrying, but that’s not necessarily a bad thing. The fact that we are worried suggests that we are taking steps toward solutions.