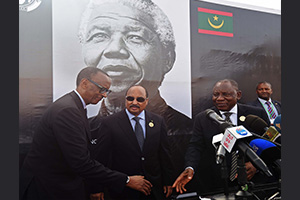 The Republic of Mauritania has named an avenue after struggle icon Nelson Mandela as part of the African Union (AU) centenary celebrations of the late statesman.

President Cyril Ramaphosa, who was on a working visit to Mauritania for the AU Summit from 1- 2 July, attended the unveiling of the renamed avenue.

“The enthusiasm and warmth with which Mauritania has embraced this event is demonstrative of the pioneering role this country [played in] our national liberation struggle and its willingness to continue to be a dependable partner to South Africa and its people.  Let’s all continue to pay homage to one of Africa’s greatest sons, who left an indelible mark on the international stage,” said President Ramaphosa.

The President was attending the AU Summit, which took place under the theme ‘Winning the Fight against Corruption: A Sustainable Path to Africa’s Transformation’.

On the sidelines of the summit, President Ramaphosa chaired the meeting of AU High-Level Ad Hoc Committee on South Sudan.

The committee welcomed the Khartoum Declaration as a positive milestone towards finding a lasting and sustainable solution to the challenges faced by South Sudan. It further urged all parties to respect and adhere to the ceasefire agreement.

In the event of any violation of the agreement, the committee must develop a framework which determines consequences where such important agreements are undermined.

“South Africa notes with appreciation the constructive role played by the African Union High Representative for South Sudan in advancing inclusive national dialogue between the conflicting parties in South Sudan, in support of AU and regional mediation processes aimed at bringing lasting peace and stability to the country.

“We stand ready to continue providing support to the government of the Republic of South Sudan and in the context of the post-conflict reconstruction and development imperatives for South Sudan,” said President Ramaphosa.

At the invitation of President Kagame, President Ramaphosa attended the AIDS Watch Africa (AWA) meeting, where he had an opportunity to present to the African Union the Common African Position on TB.

AWA is an entity of the African Union with the specific mandate to lead advocacy, accountability and resource mobilisation efforts to advance a robust African response to end Aids, TB and malaria by 2030.

“Her appointment augurs well with the Africa Union’s vision of inclusivity of women empowerment, which is at the core of Agenda 2063,” said the President.