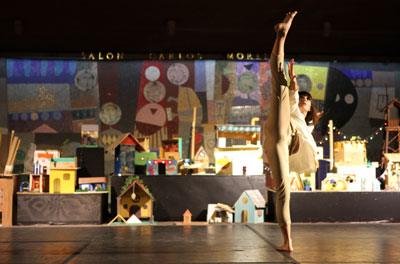 The Argentinian Cultural Week will excite local senses from 22 to 26 July as a stunning prelude to an ongoing programme of artistic collaboration between Argentina and South Africa.

Johannesburg can look forward to a vibrant arts & culture event this winter in the form of the Argentinian Cultural Week which runs over the last weekend in July, with some events extending into August and September. The exciting line-up will include exhibitions, dance performances, a theatre production, and music collaborations, and is the first of many events to run from July until the end of 2015 as part of a continuing exchange programme between Argentina and South Africa.

The two-year season will encompass performing arts, music, design, film, literature, publishing and creative economy development and the talented artists involved will participate in festivals, co-productions, residencies and exhibitions as well as at fairs and conferences. ”We are proud to present some of the best of Argentina’s culture to the South African public, and indeed to pave the way for increasing artistic exchange with Latin America. This is the first programme of its kind to be initiated between Argentina and an African country and we look forward to a long and creative relationship,” says Argentinian Ambassador Carlos Sersale.

The Argentinian Cultural Week will kick off on 23 July 2014 with the Gauteng première of the thought-provoking theatre production Cooking with Elisa, to be staged at the Auto & General Theatre on The Square in Sandton until 2 August. Written by Buenos Aires playwright Lucía Laragione, and chosen from 90 Argentine scripts as the winner of Proyecto 34°S Theatre in Translation initiative, the production will see South African director Princess Zinzi Mhlongo (2012 Standard Bank Young Artist for Theatre) direct a talented local cast of multiple award-winner Patricia Boyer and newcomer Lurdes Laice, with design by rising star Noluthando Lobese.  This exciting collaboration will mark the first time that a contemporary Argentinian woman playwright is staged in South Africa, and quite possibly Africa, and Laragione herself will be attending the Johannesburg opening night. Prior to its run starting during the Argentinian Cultural Week, Cooking with Elisa will showcase at the National Arts Festival in Grahamstown, from 6 to 8 July.

Thursday 24 July will see the official opening of two moving solo photographic exhibitions at Museum Africa in Newtown, Johannesburg. The shows, Ausencias (Absences) by Gustavo Germano and Lo Que Se Ve (What Can Be Seen), a retrospective by Adriana Lestido, run concurrently until late August, with Ausencias continuing until 30 September 2014.  Both photographers are internationally acclaimed and award-winning, and their exhibitions resonate powerfully with South African narratives. Lestido's black and white images capture intimate moments in her subjects’ lives, reflecting the mystery of human relations and the complexities of love in its many forms, while Germano's show is a devastating, personal and melancholy series of works about 'The Disappeared' - people who went missing during Argentina's Dirty War.

On 25 and 26 July, for two performances only, Argentina’s tango virtuoso, Rodolfo Mederos, and his Trio will play with the New Skool Orchestra from Pretoria. After some long distance collaboration on scores, Mederos himself will spend three days in a mini-residency with some forty young musicians who form the New Skool Orchestra.  Under the musical direction of Tshepo Tsotetsi, the Trio and Orchestra will then perform two full concerts at two different venues, on Friday 25 July at the Soweto Theatre and on Saturday 26 July at the Brooklyn Theatre in Pretoria.  The music will be an exciting and eclectic fusion of the dramatically soulful Argentinian tango and contemporary African orchestral arrangements.  The concerts are free to the public but tickets should be reserved in advance.

As an explosive finale to the two-week programme, the Combinado Argentino de Danza (C.A.D.) and South Africa’s very own Forgotten Angle Theatre Collaborative (FATC) will present performances of a brand new dance piece on 25 and 26 July in outdoor public spaces from Sandton to Soweto – watch the press for details. Created during a 10 day residency at FATC’s studio on the University of Johannesburg campus, the piece will showcase the best of these world-class companies in an eye-popping fusion of contemporary, street, hip-hop and traditional dance from Argentina and South Africa, complete with live DJ Villa Diamante.
Other exciting events, the likes of creative workshops and talks open to the public, will also feature in the two-week Jo’burg-based programme.

“With South Africa commemorating 20 years of democracy and Argentina marking 30 years since the fall of the military dictatorship, we are delighted to present this Week as a celebration and consolidation of South-South cooperation.  We would like to extend a warm invitation to the South African public to all of the events in the Argentinian Cultural Week – there is something for everyone to see, to enjoy and to be inspired by. Most events are free of charge and we look forward to a fantastic time,” Ambassador Sersale concludes.