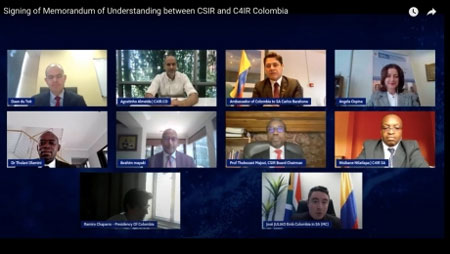 Under the leadership of H.E. Carlos Andrés Barahona Niño, Ambassador of Colombia in South Africa, a Memorandum of Understanding between Corporación Ruta N Medellin operator of the Centre for the Fourth Industrial Revolution of Colombia (C4IR.CO) and The Council of Scientific and Industrial Research (CSIR), an entity of the Department of Science and Innovation of South Africa (DSI), was signed to unlock the potential of the Fourth Industrial Revolution, including Artificial Intelligence (AI) and Internet of Things (IoT) technologies, and to bolster research capacities in Colombia and South Africa.

The Centre for the Fourth Industrial Revolution of Colombia, affiliated to the World Economic Forum, C4IR.CO arising from an alliance between the Mayor's Office of Medellín and the National Government of Colombia.

The virtual event was attended by the Minister of Commerce, Industry and Tourism of Colombia, Dr José Manuel Restrepo, H. E. Carlos Barahona, Ambassador of Colombia in South Africa, Mr. Agostinho Almeida, Director General of the C4IR, Prof Thokozani Majozi, CSIR Board Chairperson, amongst others.

The two organisations have agreed to collaborate in the areas of AI, distributed ledger technologies and IoT. The new partnership will call for the promotion of multi-stakeholder partnerships to facilitate technical training in response to the demand for new skills; the transfer of new technologies; and leveraging investment on required infrastructure for digital transformation.

“This MoU represents an important milestone for our bilateral relations, and a first step towards a better future for our nations. President Ivan Duque Marquez entrusted me with the Mission of extending the ties of our scientific, technological and innovation diplomacy through the orange economy and South-South cooperation,” Ambassador Barahona highlighted in his opening remarks.

Minister José Manuel Restrepo (Colombia) emphasized the importance of the agreement at bilateral level by saying “I think this is a relevant meeting, relevant for many reasons. One of those reasons, because here we are working together as great countries, countries who in a way share similar troubles from the past and who have had a similar path of solution to those troubles, two countries who interacting trade with a lot of opportunities, not only on trade but on investment. Two countries who have increased mutual interest in foreign direct investment and I have to tell you that 2019 was a particular relevant year in the relationship between Colombia and South Africa since we received the highest amount of investment coming from South Africa to Colombia: USD 45 million”.

Dlamini welcomed the partnership saying: “We are proud of this strategic partnership with an innovative partner such as C4IR.CO. We look forward to sharing our expertise and hope to grow new capabilities and leverage cutting-edge technologies to improve the quality of life of South Africans.”

In his speech, Colombia C4IR Director Dr Agostinho Joao Ramalho de Almeida stressed that “Tackling common challenges by the use of data, technology adoption and technology governance is one of the main goals of the global network of Centers for the Fourth Industrial Revolution of the World Economic Forum. Aiming at agile international cooperation, this agreement between Colombia and South Africa represents an opportunity to develop joint projects on topics such as government transparency or the ethical and just use of artificial intelligence.”

The virtual ceremony was also attended by Dra. Angela Ospina, General Director of the Presidential Agency of International Cooperation APC-Colombia, Dr. Ibrahim Mayaki CEO of the African Union Development Agency-NEPAD, who also pointed out the need to bring cooperation tools for the implementation of this important agreement.

The closing remarks were delivered by Mr. Ramiro Chaparro, Advisor of the Presidential Advisory for Economic Affairs and Digital Transformation of Colombia, and by Mr Daan du Toit, Deputy Director General: International Cooperation and Resources of the Department of Science and Innovation of South Africa.

The event was moderated by Mr. Jose Ignacio Juliao, Deputy Head of Mission of the Embassy of Colombia in South Africa.