Hiking to Ingeli Mountains in honour of OR Tambo 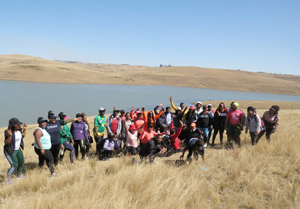 The Mbizana Community Hiking Club whose main objective it is to promote the preservation of environmental heritage as well as cultural and sustainable tourism, plans to hike to the Ingeli Mountains in honour of Oliver Reginald Tambo on 16 October 2020.

October was declared  the OR Tambo month in South Africa to honour his legacy and contribution to the liberation struggle of South Africa.  Mbizana remains one of the environmental endowed parts of the Mpondo Kingdom. It is also home to the struggle icon and longest serving ANC President (1967- 1991) Oliver Reginald Tambo  who was born on 27 October 1917 in Nkantolo village, overlooking the Ingeli Mountains which are 20 kilometres outside Mbizana, in the Mpondo Kingdom in theEastern Cape.

OR Tambo was one of the founding members of the ANC Youth League (ANCYL) in 1944 who became its first secretary. In 1948 he was elected to serve in the National Executive Committee. In 1958 he was elected as the deputy president of the ANC and in 1967 its president. After the 1960 Sharpeville Massacre, Tambo was asked by the ANC to set up the ANC’s international mission abroad and mobilise international support in the fight against the apartheid government, a task he did well as a natural seasoned diplomat including addressing the UN and many other international fora on apartheid this leading to the ANC becoming the first liberation movement to adhere to the Geneva Conventions on the Humane Conduct of War. He also created relations with various African countries to get their support in the struggle for liberation and to provide training and camp facilities for the ANC. OR Tambo died from a stroke on 24 April 1993 leaving behind his wife and three children. 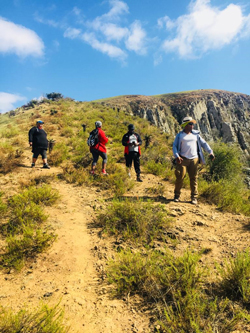 The community in Mbizana launched this hiking club to create awareness about the beauty of the region, contribute to the preservation of environmental heritage as well as to contribute to sustainable tourism of which are imperative in an era where there are concerns around global warming and its effects. According to Mr Clive Noconjo a founding member of the club, “it was launched to explore the region for areas of attraction for sustainable development and cultural programs, educate members together with communities on matters of environmental protection including plants and animals, sought to demystify myths and negative perceptions about the wildlife, encourage healthy living styles through use of our beautiful land”. He elaborated, “the other important mission of this hiking activity is to help various stakeholders including potential investors both private and public to get to know Mbizana, its people, the culture of its communities, how they live, sustainable opportunities as well as to create an understanding of how people travel to access services in town”.  He informs that the trails are usually those that connect village to village and also the scenic natural environmental wonders of Mbizana.

Hiking trails are instrumental, according to sources, in teaching people about the natural environments, provide access to the natural wonders of the areas, play a key role in securing lands for protection and promote passive involvement in the environments and awareness of their importance in the lives of people. The club, which is non profit and free to all including tourists, also got support from the Traditional Leaders in the area who have joined in hiking, notably Chief Sigcau who is the Senior Traditional Leader of AmaNdengane Traditional Council and a member of the Provincial house of traditional leaders of South Africa who has hiked with the club. Other stakeholders include Municipality officials and some local business people hiking covering 33km, 20km and 19.66km.

This community club, which is committed to playing an instrumental role using hiking to promote the preservation of environmental heritage, healthy lifestyle, contribute to sustainable rural and cultural tourism, will honor OR Tambo by hiking to Ingeli Mountain.