All Roads Need Not Lead To China

Beijing has much to lose should it continue down the path of imperial overstretch.

(Parag Khanna is the founder and managing partner of FutureMap, a data and scenario-based strategic advisory firm. His latest book is “The Future is Asian: Commerce, Conflict and Culture in the 21st Century.”)

This essay was originally published in Noema Magazine. 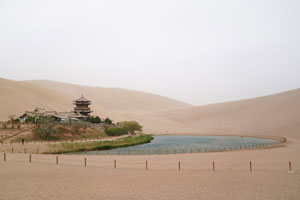 Photo: Dunhuang, China, on the edge of the Gobi Desert in western China, was once a Silk Road frontier outpost. (Lintao Zhang/Getty)

SINGAPORE — It all starts with roads. Upon the conclusion of China’s civil war in 1949, China began a decades-long campaign to push westward into restive and contested terrain. Roads and railways began to inch westward along the Yellow River and through the narrow Gansu corridor, the ancient northern Silk Road passageway between the more inhospitable Mongolian and Tibetan Plateaus, into Xinjiang, land of the Muslim Uighurs, terrain labeled East Turkestan on many maps that depicted the Anglo-Russian maneuverings of the fabled 19th-century “Great Game.” By the time the Soviet Union collapsed in 1991, Chinese roads were well positioned to expand across once frozen Cold War borders and reshape the trade relations of the half-dozen newly independent Central Asian republics. China’s plan to win the new Great Game was to build new Silk Roads.

Throughout China’s turbulent decades under Mao Zedong, the same domestic power play was unfolding in Tibet. When Tibetans resisted the convulsive campaigns of the Great Leap Forward, their 1959 uprising was crushed and the Dalai Lama fled into exile in India. In the 1962 Sino-Indian war, China seized parts of India’s Arunachal Pradesh (which China considers part of “South Tibet”) as well as Aksai Chin, a disputed region in the western Himalayas abutting India’s state of Ladakh.

Buddhist Tibet and Muslim Xinjiang are China’s two largest provinces, yet they are mutually distinct cultural universes. The only thing that connects them is a road: the Western Highway, Highway 219, which goes through Tibet along the Nepali border, over Aksai Chin’s rugged passes and then descends into Xinjiang’s forbidding Taklamakan Desert.

In 1962, the construction of this highway kindled the first Sino-Indian War. In 2020, road-building again sparked a conflict between the two countries, this time in Aksai Chin. China claims it was responding to two changes India recently made to the decades-old status quo: First, declaring Ladakh a Union Territory directly governed by New Delhi (something people in Ladakh wanted), and second, building roads in disputed areas near the ambiguous Line of Actual Control that stretches from the Karakoram Pass, which connects China to Pakistan, and the shimmering blue of Pangong Lake, which extends from Ladakh into Aksai Chin and Tibet.

Are China and India fighting over a border, or over roads?

For the Romans, Ottomans, Russians and British, transportation infrastructure was an essential tool of conquest. It is no different for China today. In a world of mostly settled boundaries, China seeks to control infrastructure and supply chains to achieve leverage over its neighbors as well as carve through them to its destination: the oil-rich Gulf region and the massive export markets of Europe. From oil refineries and ports to internet cables, China is maneuvering for infrastructural access where it cannot dominate territory. Even where China shifts boundaries by force, the purpose is nonetheless to pave the way for its infrastructure. China is a mercantile power, not a colonial one.

When it comes to using roads and rails as instruments of power projection, China has gotten used to being the only game in town. Nobody builds roads faster or cheaper, at home or abroad, as Chinese construction crews. In 2006, it took me two months in the most rugged jeep available to drive the full length of the Western Highway, with a number of high-altitude near-death experiences along the way. Every day, I would encounter Chinese road crews hard at work, and army convoys fording rocky rivers and gingerly navigating slippery gravel mountainsides. Today, you could make the journey without raising your heart rate, though you might need oxygen at 16,000-plus feet of elevation.

China has actually had little choice in taking this approach. In the 1990s, it was militarily weak but economically surging. Around the time China joined the World Trade Organization in 2001, it suddenly found itself the world’s largest importer of raw materials as well as one of the largest exporters of consumer goods. Yet still, it was subject to the “Malacca trap”: Most of its trade passes through the narrow Strait of Malacca, the world’s busiest waterway, which it does not control. Building road and rail infrastructure across neighboring states was thus something of a defensive measure to reduce dependence on a single chokepoint. When China innocuously announced its aspiration to construct a “New Eurasian Land Bridge” in 2003, few took notice. But defense can quickly become offense.

Borrowing from the Cold War paradigm, American analysts have long been focused on China’s military modernization to assess its geopolitical power. Until recently, many still held China to be only a limited threat in the western Pacific, and not at all beyond its immediate maritime periphery. Hence, it was not deemed a peer competitor. But China differs from the Soviet Union in fundamental respects. Whereas the Soviet Union was not integrated into the global economy, China is the top trade partner of more than 120 countries, and is now the largest international creditor as well. China’s main instruments in pursuit of its grand strategy have been connectivity projects, not military incursions. Rather than conquer colonies, China has sought to buy countries.

Still, by 2017, when China convened a gathering of nearly 100 countries for a Belt and Road forum, nobody viewed it as a purely magnanimous exercise. India boycotted the summit, as well as its 2019 edition, on the grounds that Chinese road projects such as the Karakoram Highway traverse Kashmir, which India claims in its entirety. Meanwhile, Prime Minister Narendra Modi also stepped up India’s pace in the infrastructure arms race, both in the east in Arunachal Pradesh (where China and India skirmished in 2017 over Chinese road-building activities) and in the west in Ladakh. In 2019, it completed a road from Leh, Ladakh’s capital, to the world’s highest gravel airstrip at Daulat Beg Oldi, less than five miles south of the Chinese border.

Continue reading this essay in full here at Noema Magazine, where it was originally published.